Just as we dropped anchor in the lovely Shell Island anchorage, we lost all DC power on the boat. Some may have solved this in 10 minutes; for me, it was a couple hours. Root causes are nice to know, but getting our DC circuits on line was more important. We got them fixed and could relax aboard as the sun set over Shell Island. Like the missing electrical root cause, I still can’t explain the phantom, rainbow sunset on the left. Shell Island is a beautiful anchorage in a 12’ deep oxbow lagoon just off the ICW. If only the crabbers would put more space between pots so boaters can swing at anchor without tangling in one.

Dawn did not sleep well that night, worrying about anchor swing while feeling the reverb of nearby tow boats, even though they passed on the other side of the marsh. Thoughts of how to avoid blowing our last 125 amp DC fuse while pulling up 120 feet of 5/8″ anchor chain hampered my sleep.

In the morning, I accomplished the latter by hardwiring the windlass to the hot side of the fuse block. It worked. We idled out of Shell Island and into the ICW, eastbound for Lake Charles. There are beautiful stretches of ICW here, where it looked less like a ditch, and more like a meandering river. We saw our first alligator and used our Audobon guide to identify birds. We also changed the game plan so we could find replacement fuses and allow time to make a couple other minor but necessary repairs.

We secured a slip at the Bowtie Marina in Lake Charles – one of their two. It’s hidden deep in Contraband Bayou, which winds behind the Golden Nugget and L’Auberge casinos. Doug Shearman and his wife run it; it was the perfect stop and they are wonderful people. 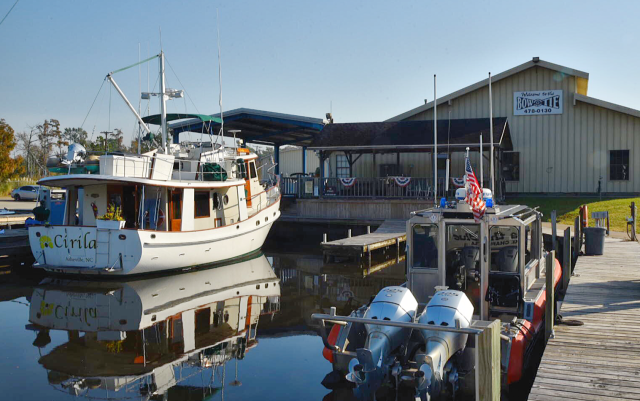 Being so safe & close to the Coasties also meant utmost discretion when peeing off the boat at night. This risk despite Bowtie having the only public pump out for 50 miles.

The Lake Charles Coast Guard Station ran patrol boats off a pier next to ours. We watched them do pre-checks before patrols, train junior cadets, and smoke and laugh around the picnic table behind the station. I was most moved watching the ritual of lowering the base colors at dusk, thinking proudly of my niece Maddie, who serves in the Army.

All that, but the coolest thing about Bowtie and Contraband Bayou is that Jean LaFitte used to hide here. Like Galveston, Lake Charles was in his main sphere of influence. Contraband Bayou has an both an entrance and exit into Lake Charles, so there was a means of escape. It’s deep, narrow, twists, turns, and its dark. We draft 4.5′, have two sonar transponders, two chartplotters, and I was nervous creeping in there. Jean came in under sail, drafting 10′. 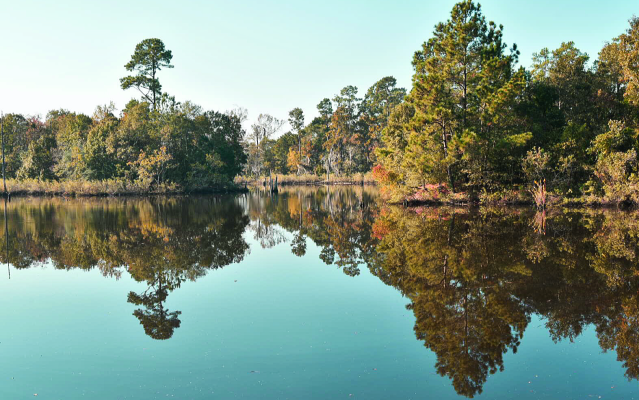 Back in Contaband Bayou, where Jean LaFitte hid and is rumored to have buried a few things

We spent two nights at Bowtie, sleeping like hibernating bears the first night and nervous squirrels the second. Second night jitters were because the next morning, we planned to wake at 3:45 am, leave the dock in darkness, navigate out the bayou and into Lake Charles, for a predawn, 90 minute cruise down the Calcasieu River, just so we could arrive at the locks at dawn. 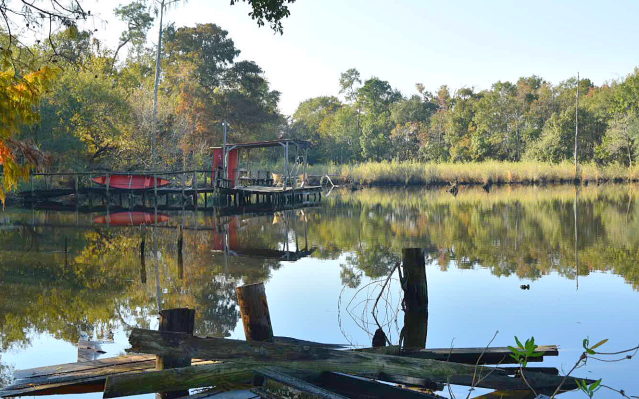 Jean LaFitt’s treasure may lie near this little fishing dock on Contraband Bayou. (Wink to my sister)

Like Loading...
This entry was posted in Places and tagged Anchor, Bowtie Marina, Contraband Bayou, Shell Island. Bookmark the permalink.